yourscottishtour October 19, 2014 0 Comments
If ever there was a restaurant that did exactly what it says on the tin then this is it.  We were looking for a quick early dinner before heading to the cinema and remembered about this place on the Royal Mile.  After actually finding it (not as easy as you might think!) we ventured inside and were greeted by a very enthusiastic waiter who got us settled at a table and left us with the extensive beer menu.  The restaurant covers two separate areas and we sat in the smaller of the two just inside the main entrance.  The decor is quite stripped back American Diner style with metal chairs and menus doubling as place-mats.  The slight elephant in the room is the large stock pile of beers that are stored in the corner not really adding to the restaurant ambience. There is an impressive choice of beer (all with terrific descriptions) plus three white and three red wines and a variety of milk shakes and other soft drinks – something for everyone.   It’s nice to see so many Scottish craft beers featured as well as the many others from further afield.  I chose the West Saint Mungo lager which had a clean taste and was light and refreshing – just the job for my burger.  Not wishing to fall asleep in the cinema, we decided to skip starters (lots of tasty sounding fried things plus piri piri chicken skewers and variations on tortilla chips). 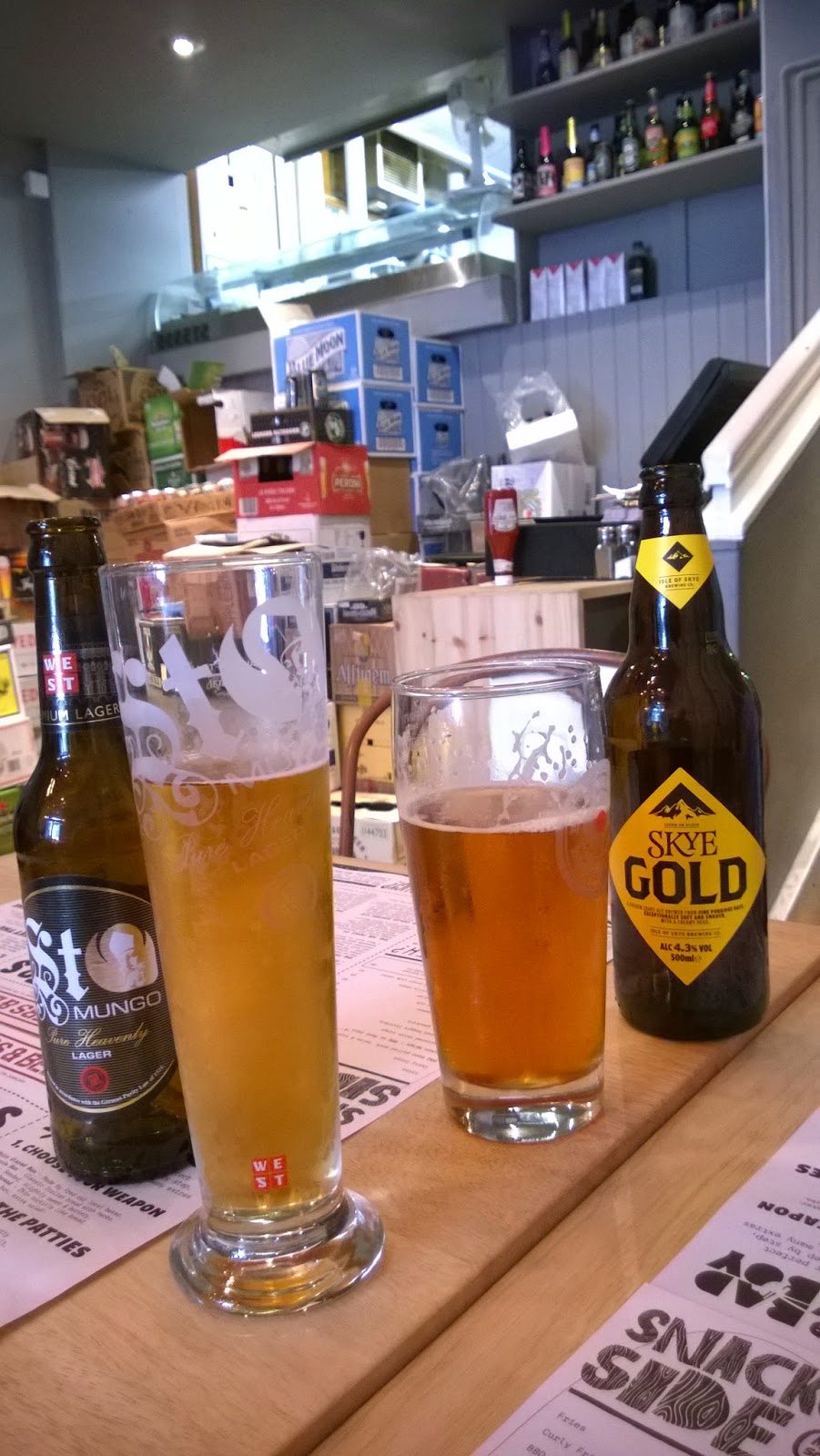 The burger takes centre stage on the main course menu with the choice of beef, chicken fillet or veggie.  You can either build your own or choose from the range of imaginative combos suggested on the menu – prices range from the £8 Uncle Sam which is the classic American cheeseburger to £14 for the Man vs Burger which is a double cheese burger with pulled pork and bacon – not for the faint hearted!  I chose the Carlos Santana at £10; a Mexican themed burger served on homemade flatbread with Mexicana chilli infused cheddar, jalapeños and salsa with tortilla chips.  Donnie went for The Frying Scotsman at £9; a burger served on a white bun with a haggis fritter, beer battered onion rings, cheddar and homemade beer mustard – no healthy options here!  Fries aren’t included and will set you back another £3 and a side salad will cost another £2. 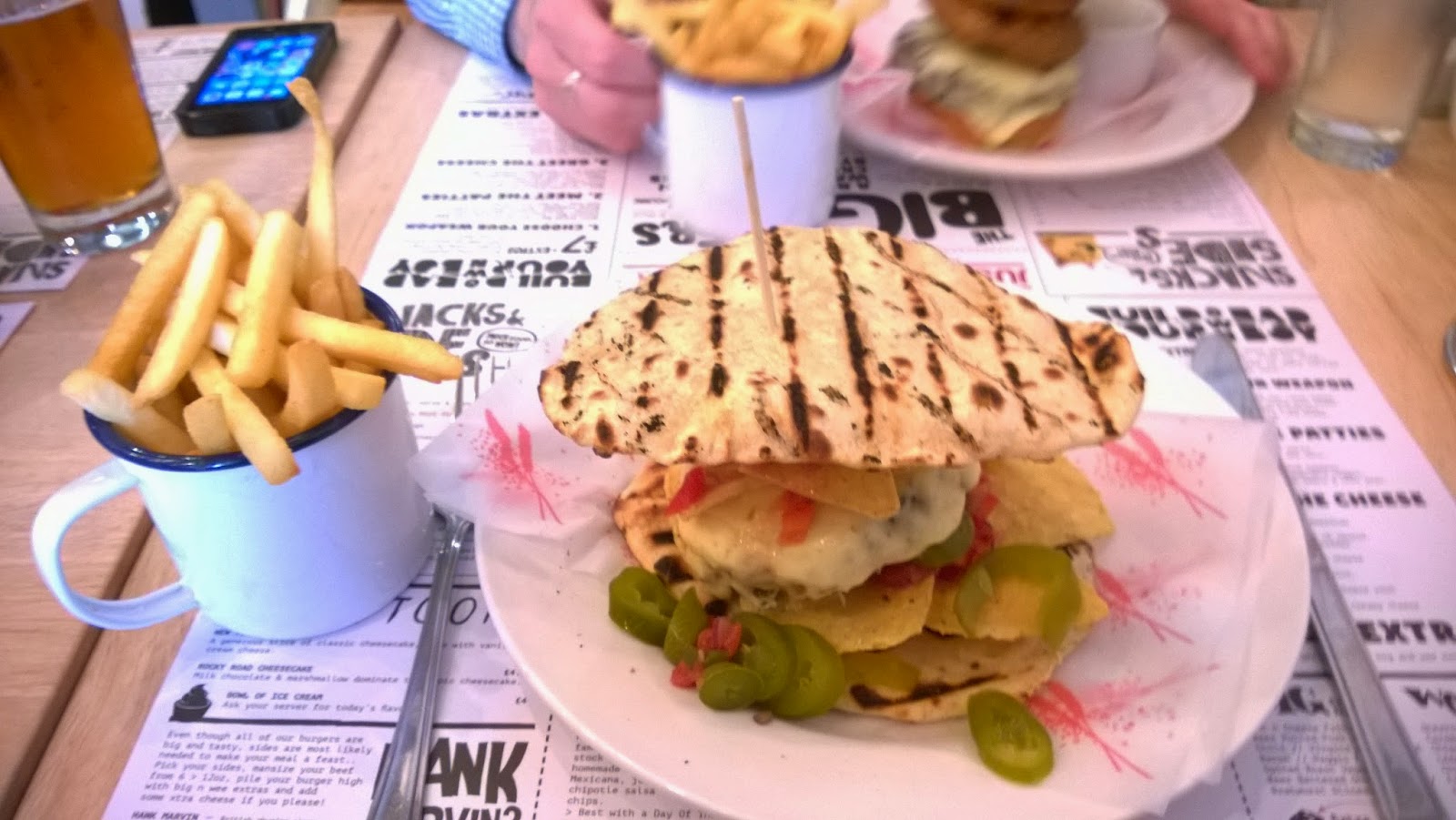 The burgers arrived and certainly looked the part – towering stacks of deliciousness waiting to be devoured.  My Carlos Santana was really tasty and was a nice combo of TexMex flavours with the added crunch of tortilla chips thrown into the mix – almost a starter and main thrown into one.  The fries were also very good – crispy on the outside and fluffy inside.  The homemade flatbread is also a nice change from the usual burger bun and the whole dish was spiced up by the chilli salsa.  The Frying Scotsman looked and tasted as described with the haggis fritter being a very naughty highlight – no deep fried Mars Bar option though!  It all worked really well as a fun guilty pleasure main that was well thought out and tasted as good as it looked on the plate. After the burger mountains, dessert probably wasn’t on the cards and the menu didn’t do much to tempt either of us – there was a choice of two cheesecakes at £4.50 or a bowl of ice cream for £4.  I can understand the focus on the main event of beer and burgers but maybe something a bit more exciting for the dessert lovers out there please?
Overall, this is a nice restaurant for a bite to eat (probably not a spend the evening kind of place) with a great selection of craft beers and very friendly service.  If you don’t enjoy burgers or beer then best look elsewhere.  We enjoy both and there are plenty of other burger and beer combos on the menu to tempt us back for another visit in the future…